Cummins Falls, is a 75-foot (23 m) high waterfall, located northwest of Cookeville in Jackson County in the U.S. state of Tennessee. Cummins Falls is the 8th largest waterfall by volume in the state.

In March of 2019, I had travelled to Tennessee to photograph some waterfalls, including this one.

Being in a State Park, there are trails leading to view the waterfall. In order to photograph this waterfall, there are two choices. The first choice is to use the Overlook which provides room for one, maybe two people to get a (poor) view of the falls. The Overlook is a narrow platform and there is no room to set up a tripod for a good photo.

The second option was to take a two mile hike heading downstream away from the falls to the stream bed and double back along the bank to the base of the falls. This route involves wading across the stream twice and scrambling over logs

and boulders. I like to get as close as I can to a waterfall, close enough to fill the frame of the camera. I chose the second option. I carry the camera and equipment in a padded waterproof camera case when hiking in order to prevent damage. I rig a strap to the tripod much like a rifle sling to carry it over my shoulder. This leaves my hands free for scrambling over obstacles in my path.

Wading the stream was an adventure in itself as my boots were not high enough for the trek across the stream. Each trip across filled my boots with cold snow melt water. This would have been refreshing in summer but in early March, not so much. Icicles hanging from the cliff face were a reminder that spring had not yet arrived.

Halfway to Cummins Falls I found another waterfall, much smaller than Cummins and partially hidden in the cliff face. It was unnamed, small, but still worth a photograph or two.

Finally Cummins Falls came into view. The upper section of the waterfall drops 50ft while the remainder of the waterfall cascades into a deeper plunge pool said to be one of the best swimming holes in the country. There were no swimmers here today. 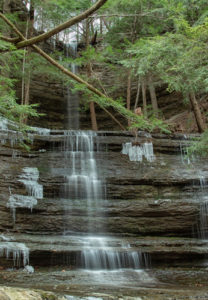 I use a Canon 7D Mark ii camera with a Canon 17–40L zoom lens mounted on a sturdy tripod. A ball head on the tripod helps to aim the camera properly. The effect I am trying to achieve is to produce a photo where the falling water has a “cotton candy” look. A fast shutter speed will freeze the water as it falls and is not as pleasing to my eye. I try for 1/2 to 1/5 second shutter speed for waterfalls. The camera is set

to Aperture Priority and ISO 100. Neutral Density filters help to reduce the amount of light entering the lens. The day of my visit was cloudy so I used a ND 1.2 filter which has the effect of cutting the amount of light by 4 stops. I aim for an f-stop in the range of 9 to 13, sometimes a bit higher. Varying the f-stop will adjust the shutter speed to a value you want. I try to have the foreground as well as the subject in focus. If you try for an f- stop of 20 or 22 or higher you might run into diffraction issues and if your sensor is dirty you will see small dark spots on your images. To prevent camera shake or vibration, I use a cable shutter release, or sometimes a 2 second timer delay.

Reaching many waterfalls involves some effort including hiking over rugged terrain while carrying heavy gear, so when you arrive at your spot, take lots of photos from many angles and locations. After all unlike wildlife, the waterfall is not going to go anywhere so take your time and enjoy the view. You may never have the opportunity to travel to this spot again.

This site uses Akismet to reduce spam. Learn how your comment data is processed.